Lots more sigs. Click on an image to view detail.

The usual pictures of my trail register taken April 24. All images are clickable to view detail.

And, here’s my usual update on the signatures on my trail register. All images can be clicked to view detail.

Lots more signatures, include Gillian and Shyla, the first confirmed thru rider (and horse) so far this year. They passed through on April 6. Wish I’d known. — I would have left out some hay.

Gillian is blogging about her thru ride here. You go, girl! I’ll be keeping up with Gillian and Shyla’s adventures ahead.

These pictures were taken on Sunday, April 3, at about 9:30am.

Hikers are writing too big for the many hundreds of signatures I expect this hiker season to fit on my surfboard trail register. Luckily, the permanent markers I am using are not really permanent under the desert sun. Each signature lasts for a few week: long enough for me to capture it in a photo. Then, it fades. So, I’ve decided to use regular updates of the trail register photo to document all the souls that have passed by. Here’s the most recent installment, taken Sunday afternoon. (It includes the signature of <name omitted>, the missing hiker.)

This was the busiest weekend yet on the PCT near me. There were no hikers at all on Saturday. Then, on Sunday, I had eight people visit my place while I was there with Gracie, practicing the banjo. Here’s a picture of the first group, posing next to my surfboard. They were a combo of section hikers and thru hikers.

I then had two singletons stop by for a rest and a chat. Not ten minutes after the second one, “Chad,” left my place, a Riverside County helicopter came swooping down. Over the copter PA, they asked whether I was <name omitted>. When I did a thumbs-down to answer no, they flew off, trail-south. I checked my trail register, and sure enough, <name omitted> was there. He was one and the same “Chad” who I had just finished talking with. (Not sure whether “Chad” was a nickname or a trail name.) Anyway, the copter circled back and I did my best to flag them down. We tried communicating by my writing BIG on the ground. You can see one of my responses in the image to the right. When that didn’t get anywhere, I signaled for them to land so we could talk. (Keep in mind that, during all of this, my poor horse was tied to my hitching post nearby, terrified of the helicopter hovering just overhead, ready to bolt at any minute.) I showed them the signature on my trail register and we figured out that this person was “Chad” who had just left, so they took off (this time in a way so that they didn’t fly directly over Gracie) in search of the hiker. Turns out, his family had reported him missing. Luckily, this story of a missing hiker ended more happily than the missing hiker, Chris Sylvia, who disappeared in the area at about the same time last year.

Two more pairs of hikers with backpacks passed by my place in the latter part of the afternoon. All -in-all, we had  12 people on this section of the trail — all of them multi-day hikers.

With this much activity on the trail, I am thinking of starting my soda and hiker box rest stop sooner than last year.

My trail register is accumulating quite a few signatures, mostly from day hikers coming up from Highway 74. 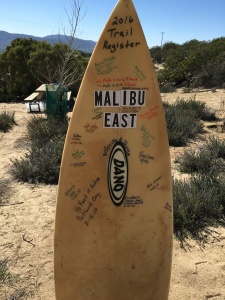 While I suspect that several of the signatures on the board are from thru hikers, I have the first one that identifies as Canada bound. Good luck, Johanna. You go, girl! 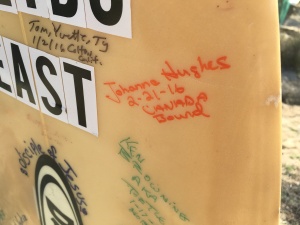 This weekend saw two more signatures on my surf board “trail register”. (Eventually, the novelty of my trail register will wear off, but for now, I check it every day to check that the markers are there, etc.) I met Ken (aka, “Turtle”) on the trail north of my place as I was returning from a ride.

For some reason, January 2 was a busy day on our section of the PCT. My new trail register had five entries on its second day out. 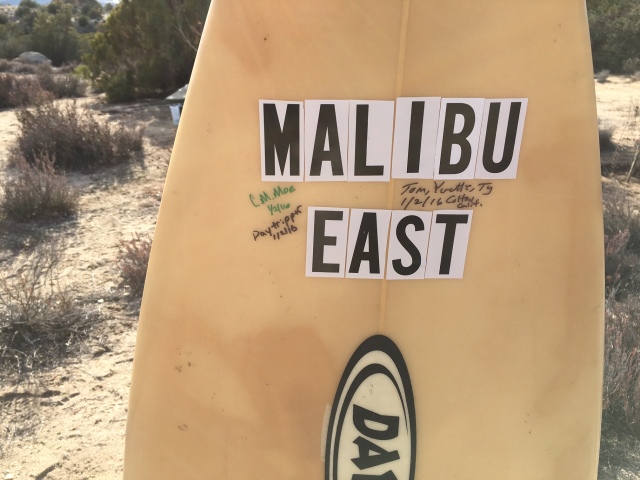