With our first El Nino storm of the 15-16 winter, I decided to spend Saturday checking trail conditions on the portion of the PCT from my place (mile 145.4) north to where the PCT crosses Highway 74 (mile). I assumed that most of the 3+ inches of precipitation that week had fallen in the form of rain, which meant possible landslides and/or erosion on the trail tread in “the usual” problematic spots that the Trail Gorillas need to patch every year.

The 2 miles up to the main ridge of Table Mountain was uneventful. — The trail was still a bit wet, but nothing significant. As soon as I hit the other (the north-facing) side of the ridge, I was surprised by 4 inches of snow. I’ve come to learn that the desert mountains are funny that way. — That side of Table Mountain remains permanently frozen from January through mid-March, even when just a quarter mile away (and at the same elevation) the south-facing slope is unfrozen — even balmy. Precipitation that fell as snow melts immediately because the ground is so much warmer. 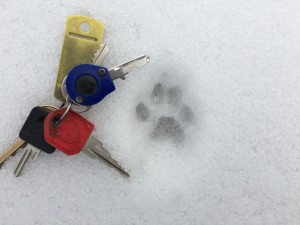 I love being the first human to walk on snow, because the number of tracks show us that we are not alone. I followed this small canine — fox or small coyote — whose paw print is captured in the photo for over a mile on the trail that morning.

One of my favorite places on this stretch of the PCT is this overlook of Horse Canyon that I affectionately call “Anza’s Grand Canyon” for its beautiful erosion patterns and steep, cliff-like sides.

I made it to Highway 74 only to find several cars with adults and kids pulled off at the PCT parking area engaged in a brutal snowball fight. I was thinking of walking to Paradise Valley Cafe for one of their famous Jose Burgers, but decided I needed to get home, so I headed back, retracing my steps.

Because the precipitation fell as snow, there was no damage to report on this section of the PCT to the Trail Chief for California Section B.