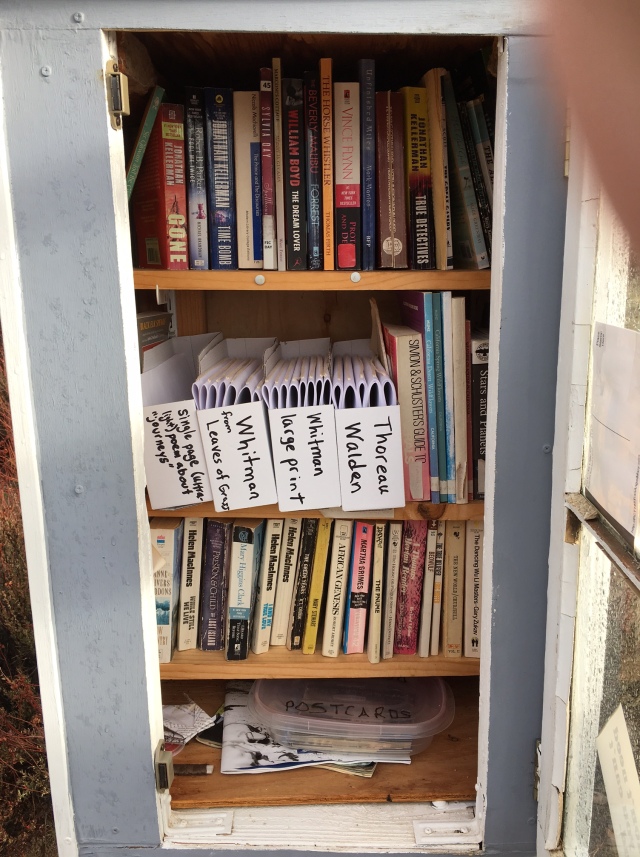 I removed half a row of donated books and replaced it with self-printed copies of Thoreau’s Walden (complete), a tiny-print and large-print version Walt Whitman’s ‘Song of Myself’ (probably the most iconic poem from Leaves of Grass), and a single-page poem, ‘Ithaka,’ by C. P. Cavafy, about journeys, that I thought might stand up to multiple readings as thru hikers reflect on their own journeys. I had hoped to finish and print up copies of my self-penned pamphlet ‘Guide to the flora and fauna of Table Mountain,’ but I just can’t seem to find time to complete it.

In addition to offering reading material for hikers, I have added a new twist on the trail register. This combines the “sign and date it”-type register typified by the 2016 Surfboard Trail Register with the “share your thoughts about water caches” 2015 Comments Notebook. For 2017, I am asking visitors: “Is there a book that has ‘dated a new era in your life’? Share the title and a few sentences about its significance to you in this notebook for those who come after you on their journey.”

I offered the first entry:

I guess I’ll start, since this was my idea. A book that has ‘dated a new era in my life’ is Thoreau’s Walden. (Actually, this is a paraphrase from Walden. — The actual quote is: “How many a man has dated a new era in his life from the reading of a book!”) I was spared having Walden murdered in a high school English class, and only encountered the book as an 18-year-old, independently of any course. It spoke to a growing sense I had that too many people were living their lives on auto-pilot, unable to see the choices they were making as choices. — An authentic human life needed to remain off of the auto-pilot of societal roles, leaving the individual to encounter each choice point with the question “Whither?” I re-read Walden in December 2016 — the first time in ~25 years — and I can only vaguely remember myself as that 18-year-old who was so profoundly affected by this work. I admit to being a bit disappointed by it now. It seemed almost juvenile. Like all life-changing encounters with art, my 18-year-old self was changed in the encounter and internalized the work, so that I am now unable to return to that naive state of my first encounter with Walden.