I had two friends up for the weekend and we decided for an off-trail hike down Alkali Wash (from PCT mile 148). With the recent rain, there were lots of tracks, including what appeared to be two pair of coyotes heading down canyon. We can upon an area with a lot of coyote activity, and my friend surmised that the coyotes were “playing.” Alas, that doesn’t appear to be what the coyotes were up to.

At first we thought it was a female coyote, but neither the coat nor the head were quite right, so we surmise it was a domestic dog or a coydog. Whatever it was, it hadn’t been dead for very long. 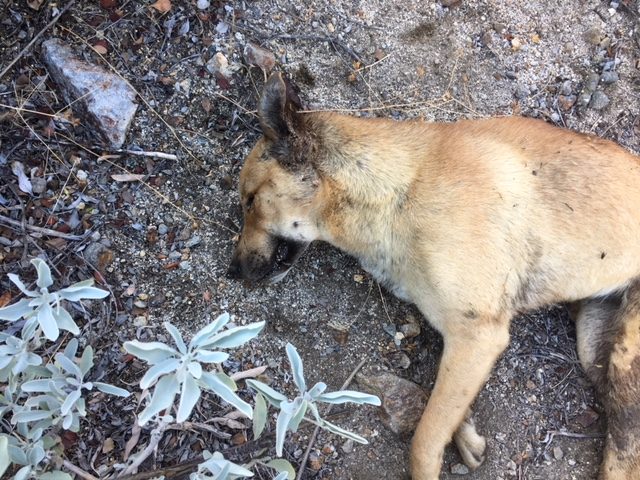 We were all surprised that the coyotes that killed it hadn’t fed on it. (Or, perhaps our arrival had interrupted them before they had a chance to.) On our trip back up canyon, we saw very fresh (as in, since we passed by on the outbound leg) coyote prints in the wet sand. It appeared to the the same pair that had left prints going down canyon that we had seen earlier.